We know that tinnitus, vertigo, and other ear symptoms are common in people with TMJ , and we have talked about the potential role of physical obstruction that could explain the link. However, neuroscientists think that the connection may also be locked deep in the brain, caused by the way chronic pain and tinnitus rewire the brain. 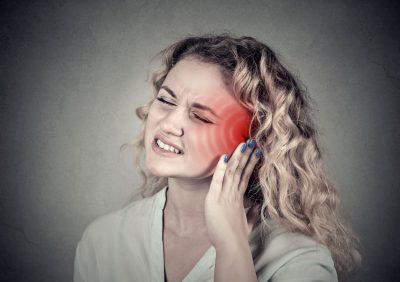 Our brain is designed with gatekeeper functions at various places intended to distinguish between normal stimuli and painful stimuli or between normal air vibrations and actual sounds. These gatekeepers keep every touch from being painful and keep us from hearing every tiny disturbance in the air around our ears.

But now researchers have found that in chronic pain and tinnitus, the gatekeeper cells become dysfunctional. They no longer sort the stimuli the way they’re supposed to–they may even create stimuli. This happens in response to traumatic injury. In the case of chronic pain, an injury existed that caused pain, and the brain became rewired. In the case of tinnitus, the rewiring was as a result of loud noises that damaged hearing.

These changes occurred in the nucleus accumbens, a region strongly associated with reward-based learning, as well as brain regions associated with so-called “administrative” roles in the brain.

How This Links TMJ and Tinnitus

Although in this study, chronic pain and tinnitus are viewed as separate events, other studies have suggested that chronic pain associated with TMJ may be closely related to hearing.

In a study showing that TMJ causes normal stimuli to be perceived as painful, functional Magnetic Resonance Imaging (fMRI) showed that there was also activation in the primary auditory cortex, although the stimuli were inaudible. In TMJ, therefore, it’s possible that pain and sound have become inextricably linked.

It’s possible that some day we will be able to deprogram this type of response, but for now we can only hope to stop the brain from being reprogrammed by TMJ, which usually means getting successful treatment early.

If you are looking for TMJ treatment in Columbia, SC, please call (803) 781-9090 for an appointment with a TMJ dentist at Smile Columbia Dentistry today.